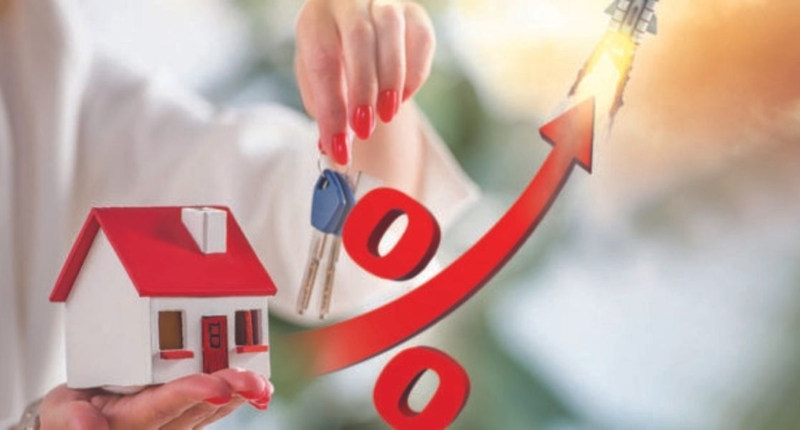 After enjoying a few years of historically low interest rates that fueled a boom in real estate investments, those working in the residential and commercial sectors are dealing with a new reality, as the highest rates in more than a decade begin to slow sales, impact trades and shave yields.

On the residential side, mortgage rates have now eclipsed 5.4 percent for a 30-year fixed-rate loan and are sure to head even higher, after the Fed raised interest rates another half percent last week. The quickly rising mortgage rates, now the highest in 13 years, add hundreds of dollars to a homebuyer’s monthly payments, which will likely shrink the current pool of house hunters.

And though some attribute the decline in sales to an ongoing dearth of available homes for sale, the inventory of listings is up more than 17.6 percent in the last three months, while sales continued to slump during that same period.

Andrew Russell, owner and founder of RCG Mortgage in Hauppauge, says the combination of bidding wars and rising rates is causing some prospective homebuyers to have second thoughts. “Rates in November were in the high twos and now they’re well into the fives,” Russell said. “You know a $500,000 mortgage over the last few months has gotten $500 a month more expensive, with those things together a lot of people are just giving up and choosing to rent for a year or two instead.”

The speed of the rate rise has forced mortgage brokers and lenders to scramble. Besides putting a fork in loan refinancing, some clients no longer qualify for mortgages they were pre-approved for just a few months ago.

“People who I approved five or six months ago, we now have to reevaluate everything because they might have been approved at a very low rate and we’re not there anymore, so it makes things much more difficult with some buyers,” said Dan Jacoby, senior loan officer with Embrace Home Loans in Melville. “There are people who were qualified months ago, but they may not qualify for that level now. Sometimes we need to lower their expectations and lower the amount they’ll qualify for to make it work.” On the commercial side, rapidly rising rates have investors and sellers recalculating pending deals and rethinking their strategies moving forward.

Mark Walsh, a principal at Select Real Equity Advisors in Huntington Station, says the fast-rising rate environment is already having a chilling effect.

“We’ve felt the impact on deals we already have in contract and deals that were set to go to contract, where people have tapped the brakes to figure out ‘Is this still an investment that makes sense for me with a different return due to the increase in rates?’ That varies from deal to deal and from investor to investor,” he said.

Walsh added that there will have to be an adjustment from both buyers and sellers to work around the additional costs that higher interest rates are going to present.

“Sellers are going to have to get a little more realistic in the marketplace and buyers, while still aggressive, are definitely going to be more cautious, because their returns will be greatly impacted by the rising rates,” Walsh said.

Austin Walker, vice president of originations for Uniondale-based Arbor Realty Trust, said while there will be plenty of adjusting to rising rates, the new reality is more like a return to normal. “Many in the industry have gotten used to being in a super-low-rate environment in terms of spreads and the indexes due to COVID-related federal stimulus and low-interest-rate policies put in place to support the economy,” Walker said. “It’s not normal to have interest rates in a high 2-percent, low 3-percent range. So while rates are rising, in reality, rates are simply normalizing.”

Walker says the biggest victims amid the rate rise are discretionary refinances, where property owners refinance to lower their rate to stretch terms or pull cash out. In addition, he said, loan-to-value ratios will come down in order to close loans and borrowers will have to invest more equity to purchase an asset today than they would have just three months ago, lowering expected returns for commercial investors.

Jonathan Schwartz, senior managing director and co-head of New York Capital Markets for Manhattan-based Walker & Dunlop, said the new rising rate environment has yet to fully reverberate through the system.

“We’re starting to see deals that historically traded at 3-percent caps, may now trade at 4 caps, depending on how high interest rates get, because going to borrow money when you’re paying a 3 cap versus a 4 cap is a very different equation, the higher the interest rate the less money can be borrowed on that same investment,” Schwartz said, adding that there are a lot of deals that are still trading, and people are honoring contracts, but there’s also some trepidation. “There are certainly investors that have gone back on deals they’re under contract on and said, ‘I’m not paying the price that I agreed to before the Fed’s increase because the price has changed.’”

Of course, the impetus for the Fed’s rate hikes is to calm inflation, which means either bringing prices down or keeping them from escalating so fast. But interest rates, though consequential, aren’t the only market conditions that are keeping real estate prices high, as strong demand continues to propel values.

However, industry observers say rising mortgage rates should eventually work to keep a lid on prices. “I haven’t seen the rate rise really affect the prices yet, but I think that it’s just a matter of time before it does,” Jacoby said. “You have a market here where the values have been going up quite a bit, the rates have gone up quite a bit, so something’s got to give at some point. I do think at some stage we’re going to start seeing the market level off.”

Russell agrees and says the demand for housing should subside somewhat.

“Over the next several months, if not years, the values could either stay where they are or even go down a little bit,” he said. “I don’t think there will be a crash…but I think we’ve seen the peak for sure for house valuation on Long Island. It’s definitely going to trend down.”

In the commercial sector, prices will likely remain robust for asset classes in big demand, such as industrial, multifamily and medical office. “I expect it to do well, especially in the short term, as the market generally follows the overall economy,” Koenigsberg said. “Despite rising interest rates, commercial real estate will remain hot, prices will rise and cap rates will fall. I understand rising interest rates will increase mortgage costs, creating downward pressure on property prices, but other factors keep pushing up prices and in turn reduce cap rates.”

“You look at industrial and multifamily, the most-favored asset classes, this is where major institutional investors are acquiring and parking money and where you’re seeing tremendous rent growth. We believe that trend will continue for the foreseeable future,” he said, adding that there’s no shortage of capital for well-positioned properties. “Rising rates of course are going to have an impact, but I think higher-quality assets are going to continue to maintain and increase in value. I think lower-quality assets are going to feel the impact. There are the haves and the have nots, and that’s what we’re seeing right now.”

Walker said that while the industry is in the early innings of the Fed tightening cycle, there is still plenty of capital chasing commercial real estate assets.

“The reality is that there is a ton of dry powder that is looking to be put to use in the market,” he said. “Even though we haven’t seen cap rates adjusting as fast as many thought they might with such an increase in interest rates, we still see folks doing deals and the market is simply getting more comfortable with the fact that they’re just going to have to capitalize deals with more equity than they have traditionally had to over the last few years.”