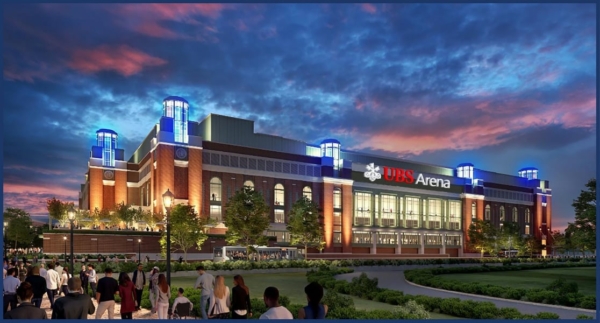 This article was updated as of July 2020.

The UBS Arena and Belmont Park redevelopment project has been underway for a few months now. Though progressing, the soon-to-be new home for the New York Islanders has sparked much controversy among nearby towns.

Most recently, the redevelopment has received opposition from nearby Village of Floral Park.

Recent opposition to the Belmont Park redevelopment project came from the Village of Floral Park, on November 1st, 2019.

The village filed a September lawsuit. In this lawsuit they’re challenging the state approvals given to the project. The Belmont Park Developers, NYAP, asked a state judge to dismiss the village’s ongoing lawsuit.

Currently, the Village of Floral Park is now requesting a temporary order to halt construction at the park.

Floral Park Mayor, Dominick Longobardi, stated the redevelopment poses “very real negative consequences” to the village “from the massive size and scope” of the $1.3 billion project.

The Mayor’s concern is over the size of the redevelopment project and the impact it may have on the local infrastructure.

There are potential issues of gridlock on area roads. This is a burden for first responders, local police departments, and the neighborhood residents.

On May 11th, 2020, the state Supreme Court dismissed the lawsuits by the Village and other civic groups. According to Justice Roy S. Mahon, the village “not shown that it has suffered an injury, in fact, distinct from that of the general public.”

About the Belmont Park Redevelopment Project

The idea to redevelop Belmont Park first originated in 2012. The first proposition was to develop on the site of two underused parking lots, near the Cross Island Parkway and Hempstead Turnpike.

Developers ended up dismissing that version of the project. On July 2017, they introduced the current plans in action, to develop on a total of five lots.

New York Arena Partners is a partnership between sports-related owners and operators including the Islanders, the New York Mets, and more.

NYAP began construction on the project at the end of September 2019 and is set to complete in 2021.

Despite a two month shutdown due to the COVID-19 pandemic, the construction is running ahead of schedule. According to Richard Browne, Managing Director of Sterling Project Development, the roof will be “topped off” by the end of summer and they are optimistic the construction will be complete  on time.

By the end of the year Brown notes the entire outside of the facility is expected to be finished, which will leave only the inside of the structure to be worked on. 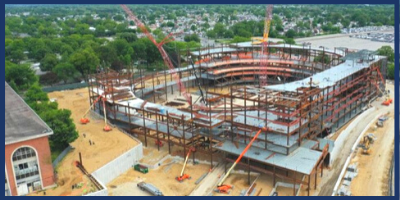 In late July/early August 2020 the multi-billion dollar financial services company, UBS, secured naming rights to developing Belmont Park Arena. The naming rights agreement is under a 20-year contract for the new sports and entertainment venue. It’s official name will be the ‘UBS Arena at Belmont Park’.

Tom Naratil, co-president of UBS Global Wealth Management said, “We have deep roots in the tri-state area and a fundamental commitment to growing our presence in the United States. This is an opportunity to demonstrate and accelerate that commitment while having a positive and lasting impact on the surrounding community.” 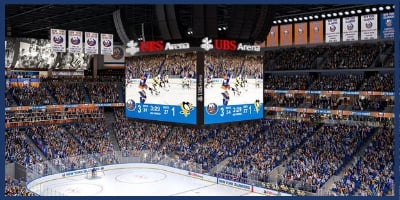 The Benefits of the Redevelopment Project

The plans for the UBS Arena and Belmont Park redevelopment project will cost an estimated $1.3 billion. The redevelopment hopes to transform the space into the new home of the New York Islanders.

According to the plans, the finished project will boast a 350,000 square foot retail and entertainment complex, a 19,000 seat arena for the New York Islanders, and a new 250-room hotel – as an immersive sports and entertainment destination.

The developers envision this project to be known worldwide for its sport, retail, hospitality, and entertainment amenities, while strengthening the local economy.

In the 2017 plans they detail an addition of 3,200 permanent jobs, and 10,000 construction jobs. Also included in the plans is the local economic impact through tourism and spending.

Expected Income From The Redevelopment Project

According to Empire State Development (ESD), the project will generate an estimated $858 million in economic output, and $2.7 billion in one time economic benefits starting in 2024.

Tax revenue for the town of Hempstead and the MTA is expected to yield $44 million starting in 2024.

Gov. Andrew Cuomo announced he would look to create more transportation options for extra traffic. Constructing a full-time service station for the Long Island Rail Road station in Elmont is in the plans.

Currently the Belmont Park station in Elmont only operates from late April to Early July, during the horse racing season.

The construction will cost an estimated $104 million. The plan is to upgrade switches and signals, and produce a full-time service station.

New York Arena Partners is putting $30 million towards the LIRR station construction, and New York State will be responsible for the rest.

Ramping up the service to full-time is a solution to address the traffic concerns of the surrounding communities.

Sign up for our newsletter to stay updated on the UBS Arena and Belmont Park redevelopment, but also for other real estate news on Long Island, too. Click here.